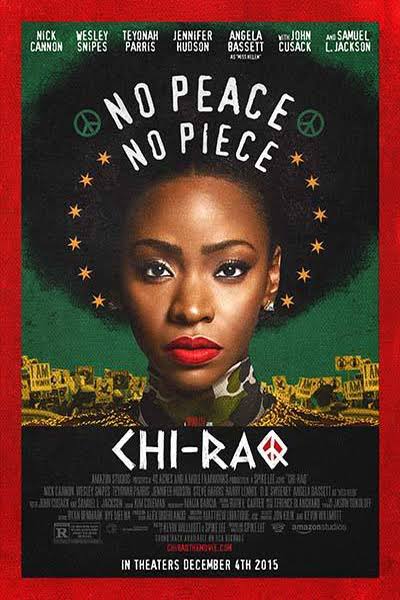 The subversive new film from Spike Lee is making headlines, and looking to make a change.

Lee’s latest project CHI-RAQ is a film that tackles gang wars in modern day Chicago through the retold story of “Lysistrata” by Greek playwright Aristophanes. In the film, a group of women lead by Lysistrata seek to end gang violence by creating a movement to shake to world and opinions about sex, gender and race.

Before the movie premiered, I had a chance to speak with Teyonah about her role and controversies surrounding the film:

Coog Radio: CHI-RAQ has been seen as a controversial title, I’ve even read that Spike Lee was asked to change it’s name at one point, what are your thoughts on this?

Teyonah Parris: I don’t see how it’s controversial, that’s what the people themselves call it. All Spike is trying to do is make people realize what’s going on around them. It’s not something they can ignore anymore and I didn’t think in this day and age that a movie title could still affect people in that way. That just proves that this film needed to be made and that hopefully it will help a lot of people understand what’s going on in the streets of Chicago and other major cities as well.

C.R. : How did you find out about this project? Were you approached by Spike Lee himself?

T.P. : He did actually. He reached out to me and we sat down and had lunch and he told me about the film. He said he intended to save lives, he told me “If I can save one live by making this film, then it’s all worth it.”

C.R. : Did you have any previous knowledge of the play “Lysistrata?” I know you attended Julliard so during that time to you study any of Aristophanes works?

T.P. : Actually, I was in a production of Lysistrata at Julliard (laughs) but I don’t remember who I played. It did help me get into character having that prior knowledge yes, but this was a totally different experience of course. This was a modern take and this is an issue that’s happening in the here-and-now, but it’s just  like what Aristophanes was referring to when he wrote “Lysistrata.” War was affecting people then, and gang war is affecting people now and it’s something that can be changed if people can find it in themselves to change their mind about what’s most important.

C.R. : The casting of this film is so fantastic, what was it like working with Spike and having a cast that was on the same page with so much experience?

T.P. : I think it made the movie that much stronger. To have like-minded individuals onset trying to accomplish one common goal was a great experience for me. And Spike, Spike was our fearless leader. He really wants to make a difference and I think with every film he’s made, he’s tried to do that to some effect. I admire all the people in this film in different ways and it taught me so much.

T.P. : I hope that they’ve maybe been exposed to a world that they didn’t really know existed if that’s the case, may be an issue that they didn’t know existed because once you’ve become aware of it, then it’s up to you with how you deal with it. There’s so much violence out in the world and on our own soil and it doesn’t have to be that way. I hope that people think about what they themselves can do to make a difference, or simply not to become part of the problem.

CHI-RAQ is in theaters now! Thank you to Coog Radio and Moroch for the opportunity to speak to Teyonah Parris.