After three years of regularly listening to Leon Bridges‘ debut album Coming Home, I was beyond excited to finally catch him in concert. The Fort Worth native’s velvety vocals and 60’s soul feel will have any music fiend singing along to his tracks. Going into the concert, I was interested to see if Leon Bridges would be tired of performing the same tracks of the album he has been “Smooth Sailin'” on for most of his career.

The morning before the concert, I read an article reprimanding the rodeo for choosing Leon Bridges as the artist for Black Heritage Day, suggesting that his “retro-soul” style doesn’t appeal to black audiences.

Watching the rodeo was definitely a new experience for this city girl, but after two hours of “mutton-bustin” and “steer-wrestling,” I was ready for some music. Leon Bridges opened strong with his popular and upbeat track “Smooth Sailin'” that just felt so right as the stage floated out into NRG Stadium and began rotating. I couldn’t help noticing that half of my section got up and left as soon as he came out. While my friend and I were ready to sing even word for the concert, we felt like a majority of the audience had come for the rodeo and decided they would stay to watch this concert that was also included in their ticket.

Leon Bridges went on to perform some of my favorites from the 2015 album including “Flowers,” “Coming Home,” and “Brown Skin Girl” with energy and zeal. I could tell he was passionate about the music he makes and wouldn’t be tired of it anytime soon. As a long-time fan of the album, this made me really happy. Leon Bridges also peppered in some new music that I am really looking forward to. The music, a distinct departure from the somewhat homogenous Coming Home, will indubitably put him at the forefront of his league.

The concert, still full of energy from Leon and the few of us in the audience who were actually there to see him, took a huge turn when he brought out UGK‘s Bun B. Bridges and Bun B performed a smooth and cool rendition of UGK’s “One Day” that had me giddier than a hip-hop nut can possibly be in Bun B’s presence. Between Bun B’s fresh verse and Leon Bridges’ lush version of the ever-so-familiar vocals on “One Day.”

Closing out the concert with a bang, Leon Bridges performed “River” and “Mississippi Kisses.” Pulling out his guitar for his most popular song, Leon Bridges definitely made fans out of those who might not have been before with his beautifully simple yet strong “River.” It felt even more organic than the already crystal-clear, raw recording on the album. Finishing out the concert, he performed “Mississippi Kisses.” At this point my friend and I were on our feet dancing with Leon, completely oblivious to the weird stares I’m sure we were getting.

Ultimately, I had a great time at the concert. It would have been nice if the concert wasn’t subjected to stadium acoustics, but I’m not going to complain. Leon Bridges gave the concert everything he had, despite a somewhat unappreciative, sparse crowd and doubt from the press. In the end, it was clear that his fans love him and he loves his fans. But, most importantly, Leon Bridges loves the music he makes and stands by his art. 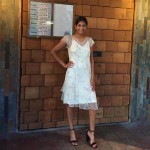