The Replacements are an ’80s punk rock/alternative outfit from Minneapolis, Minnesota, whose claim to fame is drinking and a “100 steps forward and 99 steps back” approach to success. Like all great rock acts before them, they developed a fairly extensive rock mythology before disbanding in 1991. Real, verified stories include almost getting the entire Warner Bros. label banned from performing on Saturday Night Live after swearing in the middle of a song. Followed by, drunkenly destroying everything they touched while there. In another, they invented a new game called “Dodge Knife“, derived from the popular kids game, dodge ball, between recording sessions.

While the behavior is not particularly  admirable, it is inseparable from a charm that’s often hard to put a finger on. Because, between the drunken antics, they had an incredible output of music. Music, that would later influence and create a space for alternative rock (whatever that means nowadays) that influenced bands from Nirvana to Wilco. Billie Joe Armstrong from Green Day, who recently released three new tracks from his latest project, once said that “if it wasn’t for [them] I might have spent my time playing in bad speed-metal bands.”

You can make your own judgment though. If you want to and are also down with the idea of listening to some good ol’ dad rock, here’s how you can best get into an ’80s punk band. Ease into The Replacements’ discography and avoid their hit or miss “Dodge Knife” era material.

This is probably their most cohesive album given that it isn’t marred by any production or mixing style. There is an odd inclusion of horns and spy-sounding grooves, though they aren’t overt and are interesting to listen to at the very least. Pleased to Meet Me is not their best album, but it has its high points and few to none low points. Overall, it’s easy to listen to top-to-bottom.

Real album cover here. A while back, I was into making hip-hop beats. At the time I was using synthesizers and plugins to make the melodies and sounds overall. However, it annoyed me to no end. I would have to take an absurd amount of time fiddling with knobs to get any sort of tolerable sound out of the things. It was like if you wanted to pick up a guitar and play, you would have to set up the equipment for an hour before anything came out of the speaker – each time. So, I started looking for records to sample in order to forego the grueling process. I came across Let It Be in a Goodwill store (I think it’s a western apparel store now.). It’s rare for a rock record to have anything decent to sample, so I generally skip over them. Nevertheless, the cover looked cool and I picked it up for $3 or so. Turns out it was pretty good. The album is short and a little all over the place, however. It’s basically a coming-of-age piece that contains, arguably, the band’s best material. And also a KISS cover?

Tim would have been their best, if not for the production. It succumbs to the trends of the ’80s, trends that have since been abandoned. The sound is hard to describe, but you’ll know it when you hear it. However, the songs are tighter. They’re also more tame since the energetic lead guitar player was apparently absent for a decent amount of the recording. It’s both a strength and weakness, but combined with the production quality, the record suffers.

This album is genuinely awful in some places. As a goof, everybody switched instruments for the first track. The result is the sound of a reluctant junior high marching band tripping over themselves to the tune of an uninspired blues jam. “Willpower” is just strange. “Mr. Whirly” is one half of an “Oh, Darling” cover by The Beatles, and the other half “Oh, no”. There are some standout tracks produced in a style that continues to grow in their next record, Let It Be. which makes it good in those moments.

I think this is when they started throwing knives at each other. In no way are the songs bad, but they doubled down on the ’80s style. The tempos slow down and just chug along without any of the energy that makes their other albums great. Everything seems a tad forced. You might hear this while you are riding into sunset on a motorcycle with aviators on. I kid, though. It’s not that bad.

This first album is markedly different from the rest. It’s exactly what you think a punk album sounds like in 1981, albeit a little more melodic. If you’ve gotten this far, then your opinion will soften a bit. Overall, the album is pretty solid for what it is and is fun to listen to.

A pure ’90s soft-rock album, if you’re into that sort of thing. The album was originally slated to be Paul Westerberg‘s, the front man, first solo release. The band’s spirits were finally broken after years of missed opportunities, and the childish behavior stopped being cute. The only remaining members that hung around for the project were Tommy Stinson, the bass player, and Paul Westerberg. Unlike one of their successors, Kurt Cobain, who said that “it’s better to burn out than fade away”, The Replacements went out with more of a whimper, hence the album cover.

Before The Replacements, I never had much of an interest in the music that came out around the ’80s. I associate the decade primarily with a liberal use of primitive synthesizers, hair metal, and unsettling Devo music videos. I was unaware of the hidden gems that heavily influenced the sounds from the ’90s and onward. Good music seems to transcend the time period it was created in, and The Replacements have curiously lived as strong or stronger since they called it quits in 1991. If you don’t have the good fortune of finding great bands in random bargain bins, here’s a place to start. 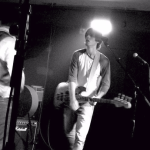