Columnist Leslie Campos and our new Station Director Davis Mendoza Darusman were each able to catch a showing of the Alley Theatre‘s production of Constellations, which will be running until June 2nd. Below are both of their reviews of the venue and production, along with a little peek-behind-the scenes, courtesy of the Alley in Context post-talk series.

DAVIS: 70 brimful minutes leaving the audience begging for more, 51 nonlinear scenes serving as a puzzle for the audience to decipher, and 2 astonishing actors delivering emotionally powerful performances made for 1 impeccable play: the Alley Theatre’s production of Constellations, written by Nick Payne and directed by Leslie Swackhamer.

LESLIE: The show was held at Houston’s very own Alley Theatre. Truth be told, I’ve never attended a show at the Alley before. There wasn’t a particular reason why—it just wasn’t something I thought about often—but after going, I realized that I’ve really been missing out. The venue is so comfortable: classy, yet not intimidating. Everyone there was super helpful, making my experience from arriving in getting into my seat a seamless transition.

However, I have to be very honest and bring attention to the fact that from the get-go it was very apparent that I did not fit the general demographic. I am a 21-year-old person of color with a shiny septum piercing, while the other attendees looked more like the professors at school. That being said, as we got closer to the start of the show, more millennials started to arrive. Plus, I was never explicitly made to feel like I didn’t belong. In contrast, I feel like I may have been welcomed all the more. Let me clarify that the demographic factor is not a negative; it is just a simple observation and something that you should be aware of should you want to go. And, given the spectacular performance I saw, I argue that you should want to go. 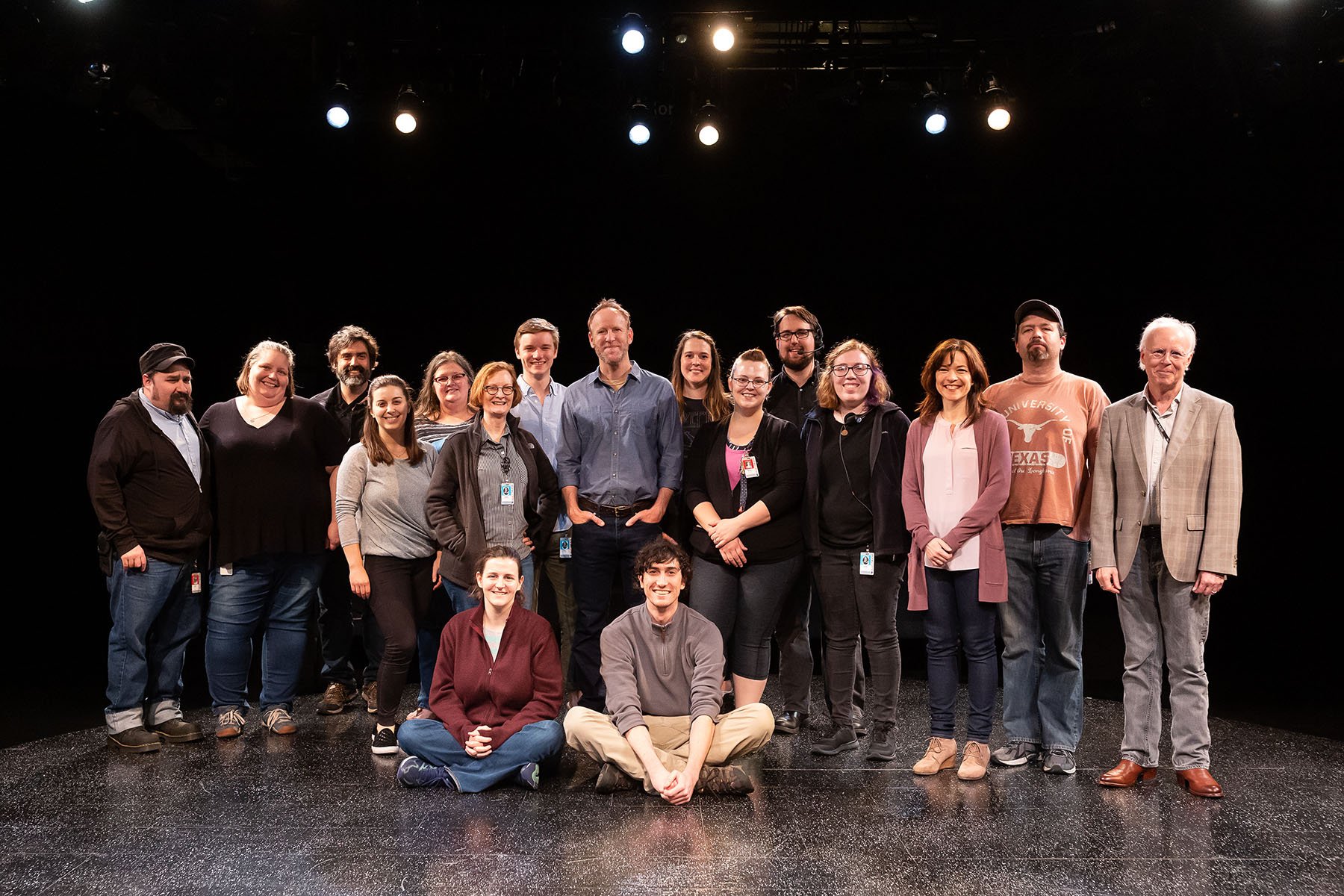 DAVIS: Upon entrance to the Alley’s Neuhaus Theatre, audience members are greeted with the ambient sounds of the pitter patter of rain, soft draws of a bow across a violin, and the occasional car vrooming by, properly establishing the tranquil urban setting of the play. The theatre is arranged in an arena configuration with seats encircling the stage, providing an intimate perspective surrounding the play’s stars, Alley Resident Company veterans Elizabeth Bunch and Chris Hutchison.

Before the play even begins, you can get a feel for the Alley’s average audience demographics not only by looking around at the people in their seats, but also by turning to one of the first full-paged ads in the program, which served as a guide to Social Security and wealth management. Unless required by a class or pursuing a theatre degree, college students generally don’t attend plays – which is an absolute shame because Constellations tells a remarkable tale of love, vulnerability, and anguish that would touch any adult from 18 to 81.

LESLIE: The day of the show came right after another one of Houston’s flooding spells. While the water level had subsided, it also started raining pretty hard the day of. Having said that, there was still a great turn out to the performance. The stage was set up with an arena configuration, meaning the circular stage was surrounded by audience members on all four sides. Personally, I’m usually not a fan of this structure because it can feel as though I’m only getting bits and pieces of the performances. However, given the nature of the play, it was obvious that this was the best choice and everyone in the production was truly able to use this to their fullest advantage. The show itself had a runtime of an hour and ten minutes with no intermission.

Constellations was written by British playwright Nick Payne. Payne has been widely acclaimed and there’s no question as to why. The premise of the show is one where we, as the audience, are introduced to Marianne and Roland. And then we’re introduced again.

And one more time, just for good measure.

See, the audience was very quickly taken into the different multiverses that all the different Mariannes and Rolands reside in. With an excellent coordination of lights, sound, and the ability of the actors, we believed each and every possibility that was presented before us. We go through all the different lives: One where Marianne really hits it off with Roland, immediately followed by another where Roland is super off-put by Marianne, with each scene being performed with such authenticity that each time feels like the first time. Then, after some sort of relationship between them was established, we trailed along with the lives of the characters, experiencing every outcome, going through the most euphoric highs and deepest lows. It almost felt like we were listening in on a private conversation. The audience found itself trying to make all the ‘right’ decisions as one would; however, just like in our world, the characters are constantly hit with the monster that is real life. Sometimes everything or nothing works out in our favor, sometimes miracles do or don’t happen, and the piece brings us to this reality. All the while, throughout everything we experience, there is still a sincere attempt at working to maintain our humanity (and whatever that means to each of us).

I mentioned a circular stage and an arena structure. With every multiverse change, the actors Elizabeth Bunch (Marianne) and Chris Hutchison (Roland) change position on stage. One minute they’re arguing with each other on opposite sides of the stage, then the next minute they’re literally rolling on the floor lying next to each other. As if acting ability wasn’t enough of a hurdle to perform this show with honesty, they also took on the extra step and made this a crazy athletic show as well. The production made excellent use of the space.

Speaking of their acting chops, holy moly. The profound talent of Bunch and Hutchison is literally insane. This is best seen with their scenes that consist of high-intensity emotions, as their portrayal of such raw experiences left me reeling. I didn’t know if I wanted less or more. Then, as if that wasn’t enough, within a few seconds they would go straight into the next scene where everything was all fine and cheery and normal, with not a hint of what was left in the previous scene. The emotional intensity and acting range that Bunch and Hutchison displayed left a very powerful impression.

The story follows the will-they-won’t-they romantic relationship between an ardent cosmologist, Marianne (played by Bunch), and robust beekeeper, Roland (played by Hutchison), but it’s not the average will-they/won’t-they narrative by any means. Constellations explores the realms of string theory and alternative universes in its storytelling by conveying roughly the same seven moments told in a myriad of ways, with each rendition entirely transforming how the characters interact with one another. Through this narrative device, the play is able to show both the will-they and the won’t-they.

Husband and wife in real life, Hutchison and Bunch deliver an outstanding performance as they meticulously embody every single incarnation of Roland and Marianne, truthfully serving as the story’s anchors while the world changes around them. Despite their character’s behaviors and motivations altering with each iteration, the audience can’t help but to empathize with each alternate personification: We fall in love with the characters as they fall in love with each other, we cry with Marianne as she fights her hardest battle yet, and we cringe with Roland as Marianne awkwardly flirts with him (it’s hard not to wince when midget porn is used as a pick-up line).

Without any set, scenery, or props (aside from a ring and a piece of paper), the production of Constellations is driven by Pierre Dupree’s marvelous sound design and Kevin Rigdon’s (one of UH’s own!) calculated lighting scheme. Without their direction, it would have been very easy to get lost in the plot’s enigmatic complexity, but Dupree and Rigdon gently guide the audience with familiar sound cues to indicate a repeated sequence across the multiverse and deliberate light designs to serve as a chapters detailing when and where in time we are.

The Alley Theatre’s production of Constellations serves as a powerful testament to humanity’s longing to love juxtaposed against our everlasting battle against time. Swackhamer’s brilliant direction, accompanied by Dupree and Rigdon’s technical guidance, openly invites the audience to explore the multiverse and join the journey of two shining stars sharing the stage.

LESLIE: On this particular showing, there was an event in which audience members were invited to stay after the performance to hear from the show’s director, Leslie Swackhamer (great name, by the way), and the sound designer, Pierre Dupree. In the Alley in Context event, we were given insight into what went on in anticipation for the piece.

Sound designer Dupree described his process while preparing for the show. His position is unique, in that he depends on a lot of other visual people. For this show in particular, sound was a medium that really anchored the different worlds and multiverses. He also explained his procedure of using Spotify to build a playlist of musical themes and instrumentations he envisioned for the show. He created a sonic storyboard that had checkboxes listing characteristics like:” Is this a fast sound? A slow sound? Is this an emotion that an oboe could capture? Or would it be better portrayed by a cello?”

Dupree asked himself countless questions like these for all 51 scenes. Yes, you read that right. What? I didn’t mention that this show has 51 scenes in 70 minutes with countless repeating lines? Well, it does, and another fun tidbit is that actors Bunch and Hutchison were off book by the end of the first week. Yes folks, they’re ridiculous in the best way possible.

Director Swackhamer mentioned that the script itself had no stage directions, making this an incredibly flexible play with many possible interpretations. Swackhamer crafted the show with the idea that “it’s a cosmic story, but it’s actually anchored in humanity.” With her objective in mind, Swackhamer created a show that is completely unique to Houston. You will literally never find another production that is exactly the same—and once you experience this yourself, nor would you want to!

The show will run until June 2nd, and the Alley offers student discount for all shows if you have a valid student ID. Make sure to purchase your tickets here (with promotion code: STUDENT) to ensure that you’re living in the alternate universe where you get to experience this wonderful play.