“You are now watching the greatest boyband in the motherf—— world . . . second to One Direction.” – Kevin Abstract

Allow me to preface this by saying I’ve been a fan of Kevin Abstract (and by proxy Brockhampton) for quite a bit – and by quite a bit, I mean I was there while they were still constructing their mythos of being an all-American boy band. The pull quote from the article that first put me onto them back in early 2016 was Kevin saying, “The biggest pop star in the world should be a creative black kid from Texas,” and that was it. I was sold. I was there at the height of my teenage obsession, back when Brockhampton was just a group of creatives with day jobs and big dreams sharing a tiny apartment in San Marcos, Texas.

I give this exposition not to brag about how hip I am (but let the record show that I am very hip), but to highlight just how extraordinary it is that they have achieved so much in such a short amount of time. Brockhampton have undeniably reached pop star levels of notoriety in the right groups, and probably had a hand in shaping what fame must look like in the digital age. After not seeing them live in over a year, I got the chance to witness this newly acquired stardom firsthand Sunday night at the Revention Music Center, where Brockhampton would stop as part of their I’ll Be There Tour to play songs off of their latest release, Iridescence. With the modifier of of “boy band” instead of pop star, I’m now convinced Abstract’s words from 2016 were a self-fulfilling prophecy.

In true boy band fashion, the group is personality-centric and all six performing members fulfill a vital role.

As a reformed One Direction fan, I’m well acquainted with the feeling of teenage obsession, and the audience was absolutely saturated (mind the pun) with that energy. In the most brilliant marketing strategy since some upper level execs realized you could double the chart life of any pop song by just adding a rap feature, Brockhampton decided to force themselves into the mainstream by literally saturating the market with the best music they could produce in the shortest amount of time. Thus Saturation season began, with three releases within the span of each month, each more ambitious and anticipated than the last. The plan clearly worked, as now Brockhampton’s name is on the lips of any teen who wears Vans or has a meme account on Instagram.

I don’t mean to demean the audience I saw Sunday night (which at the end of the day, was only about 60% teens) at all: I think the group is currently more brilliant than ever, and every 15 year old there was much cooler than I could ever hope to be. The fact that their fanbase is beginning to skew a bit younger and more female (and more queer!) is an excellent thing. I was once a teenage girl, so I can say with authority that they have great taste and undying loyalty – all of which was on full display. The start of the show was delayed 45 minutes due to Brockhampton trying out new screen visuals for the first time in the tour, but if the crowd cared even a little bit it wore off as soon as the boys came on stage. I couldn’t be too bothered myself, as the visuals really did add something special to the show.

True to the aesthetic of the Iridesence era, the screens featured infrared live footage of the stage interspersed with depictions of boyhood in early 2000s suburbia: skateboarding, video games, GoGurt commercials, you get the drift. The concert itself was hampered by repeated sound issues issues that visibly frustrated the members, who later took to Twitter to apologize. The two times the audio problems were such an issue that they interrupted the show, the crowd was nothing if not supportive (or maybe just blissfully unaware). If there was any break in the show, including the full 45 minutes before they came on stage, the crowd was sure to be affectionately chanting, “F— you Kevin,” “Yeehaw,” or when they were drained of their creativity, “Brockhampton.”

Technical difficulties aside, their performance was on fire from start to finish. The show opens with just Kevin Abstract alone with a spotlight on stage rapping his confessional verse on the album’s reflective track “Weight.” It’s calm for about a minute, and then the beat comes in, the rest of the boys come out, and everybody goes absolutely wild. The first half of the show was Saturation-heavy (heavily Saturated?), with fans screaming back every word, only pausing at the spaces where Vann’s verses once were. Those parts of their older songs were cut entirely. This was undoubtedly their best option as a group, but each time they passed right over his verse you could feel the crowd collectively frown, as though there was just solid ground where they expected there to be another step.

Otherwise, both the group and their audience (I’m including myself in that mix) maintained a level of energy throughout that was impressive, especially considering how much moshing was going on. I attribute this in large part to Brockhampton’s constant crowd interaction. Whether it be call-and-response or just a quick “I want to see y’all put both hands up!,” they demanded a certain level of hype that everybody was happy to match.

The best example of this, surprisingly, was a performance about midway through the show of the new track “Where the Cash At” with only Merlyn Wood and Matt Champion on stage. Merlyn started acapella, asking the crowd to “repeat after [him]” and then rapping the near-incomprehensible chorus. Very few people managed to repeat after him, but just about everyone tried. Once the backtrack came in Wood and Champion were absolute dynamite, controlling the stage as if they were six people.

It wasn’t all hype though. Perhaps the best moments of the show came during the vulnerable, introspective songs off of Iridescence. A large part of what makes Brockhampton appeal to a young adult audience are the themes they return to again and again: an insistence on rejecting limits and a need to grow beyond yourself. No song they played exemplifies this philosophy better than “San Marcos.” The song’s chorus, “I want more out of life than this, I want more, I want more,” is simple but gorgeous, and about twice as moving when put in the context of the growth Brockhampton has already done since their humble beginnings in San Marcos, Texas. Maybe it’s trite, maybe it’s a bit too on-the-nose, but a crowd full of young people (many of whom have similar creative ambitions) screaming that chorus back at their teenage idols over a swelling orchestral backtrack really did make my eyes water up, just a little bit (but again, let the record show that I am very cool).

The show didn’t end on that note – rather, it ended with Saturation III opener and total banger “Boogie” – but those softer, more intimate moments were my biggest takeaways for the night. Brockhampton, to those teenage stans and to me, signify hope and infinite possibilities in an industry that can at times feel cookie-cutter. In tandem with their hard work and raw talent, they’re a bunch that have never been shy about their humble origins, grand ambitions, or struggles. In my mind, they’ve cemented their status as the future of boy bands to come. The greatest pop stars in the world can, should, and will be a group of creative kids from Texas, and I couldn’t be more pleased about it. 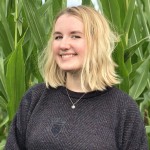 Adison Eyring was a past Coog Radio Web Director who majored in Media Production and minored in Classics. If you see her around, buy her an iced oat milk latte and tell her she's doing okay.